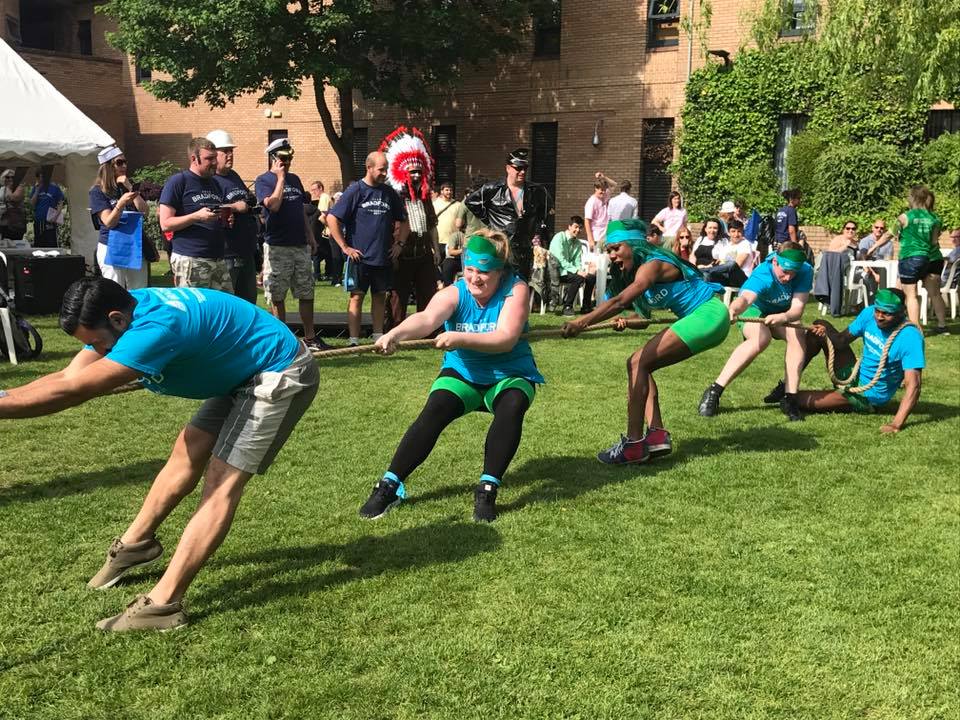 This is Us: Emma Price

Emma has the sort of dynamic personality that radiates warmth even through a Zoom screen. She is the Senior Corporate Marketing Officer but has worked in various departments since joining the University of Bradford in 2013, amassing some great memories and experiences over the years.

How would you describe your role in a couple of sentences?

I’m quite new in this role as Senior Corporate Marketing Officer, it’s split half and half between corporate and commercial marketing.
The corporate element encompasses supporting our vision and values and making sure that comes through with everything we do like Shirley Congdon’s speeches, for example. The commercial marketing side of the role includes things like supporting the gym, nursery, and all other commercial outlets to improve their reputation, presence, and profit.
I’ve actually been at the university since 2013 so have done a few roles including Alumni & Development, Press, Engineering & Informatics, Advertising and Campaigns. I’ve got quite a broad view of the university! I’ve always had a passion for brand and campaigns. It’s an interesting product that we’re communicating with many different facets to it so it’s still a massive change even moving around the same organisation.

It has been a big change for me, I’m a very sociable person. I often find new projects by having open conversations with people around the office and finding out what they’re working on and find new angles on things.
At the beginning, I felt a bit like a lost part but when I realised, I was having the same conversations with the same people all the time, I decided I had to make a more considered effort to chat to people I hadn’t spoken to in a while. Since then, I’ve found it has felt more collaborative again.

We have rebranded Unique Fitness which is the gym, and we’re finishing the roll out of that at the minute which is exciting for me because I love branding.
In December, we launched the ‘Emergency COVID-19 Student Hardship Fund’. We’ve got big hopes for this because a lot of our students come from poorer socio-economic backgrounds which means they are less able to rely on their parents for support, they’re more reliant on jobs which may not be available right now and their parents might be in a similar situation. A lot of us had part-time jobs alongside our studies but 0-hour and low hour contracts that students normally get working in shops, bars and restaurants are just not available at the moment.
It’s an important campaign and it’s always great to know that your work has real-world impact, and it matters. I’ve been supporting the development team with this project so definitely can’t claim credit for that, I’ve just facilitated it.

I think one of the highlights is definitely being part of the graduation ceremonies. It’s sad that we’re not having physical ceremonies this year but the team have done a really good job with putting on a virtual celebration. Another is the Team Bradford Tournament. It’s just the best team building experience. I always love that we get to mix with students because it’s important to keep us all connected as they’re at heart of what we do and those spontaneous conversations often propel a lot of my work for the rest of the year. Also, about five years ago, I met Darth Vader on campus! It’s not every day that you get to walk around with Stormtroopers and Darth Vader, that was cool.

Let me think, I can only think of the tug of war at the end of the Team Bradford Tournament. It’s the big finale for all the teams. I can be quite competitive and stubborn and like to think of myself as strong, but we had poorly resourced our team for this round! We’d used our strongest people in the game before so they needed a rest which left us weaker folk to do it so we unsurprisingly went flying down the field. A photographer managed to capture the moment and it was not a pretty look!

I was born in Ceuta, in Spanish Africa. It’s at the most Northern Point of Africa, just below Gibraltar. My parents were travelling at the time in a sort of hippie convoy of buses when I was born!

I think the idea that you can always do better. It can be a negative if you beat yourself up about it but I never get to a point when I’m 100% done, I’m constantly looking to do better. I’m also very lucky because I’m most inspired by the good, inspiring and warm people around me.

Just to have more confidence and believe in yourself. Stress less about the smaller things. The most successful people in the world are less concerned with that and filled with self-belief.

With the last five years we’ve had in terms of the political situation around the world, I would go to the past. First of all, it’s risk-averse but also, I’d like to see animals and bits of nature that we’ve since destroyed.

It’s probably the widening divide between the socio-economic cultures around the world; the poor are getting poorer and rich are getting richer. That widening gap is what worries me. Especially this horrible trend you see on social media of people being proud of their massively imbalanced way of life and flaunting when there are so many people struggling in the world. And, the polarisation of different political opinions and everything that comes with that divide. I think that influences how there’s an echo chamber issue where we become more polarised and less capable of listening to others’ opinions. That’s what we need to overcome.
I’m hopeful that younger generations are more aware, more switched on about the dangers of echo chambers and judging others. They’re more socially aware and I hope in the future there will be more acceptance and diversity. I think it’s happening and that’s positive.

‘Do you want a Pepe’s?’ which is the take-away from across the office (lots of laughter). They do chicken and peri-peri fries, it’s very nice. In fact, it’s my first time being in the office in a long time so I’ve had some today to celebrate.

If you enjoyed getting to know Emma, you will love the rest of the ‘This is Us’ series. Check out my previous chats with Neema and Leanne and stay tuned for more coming soon!