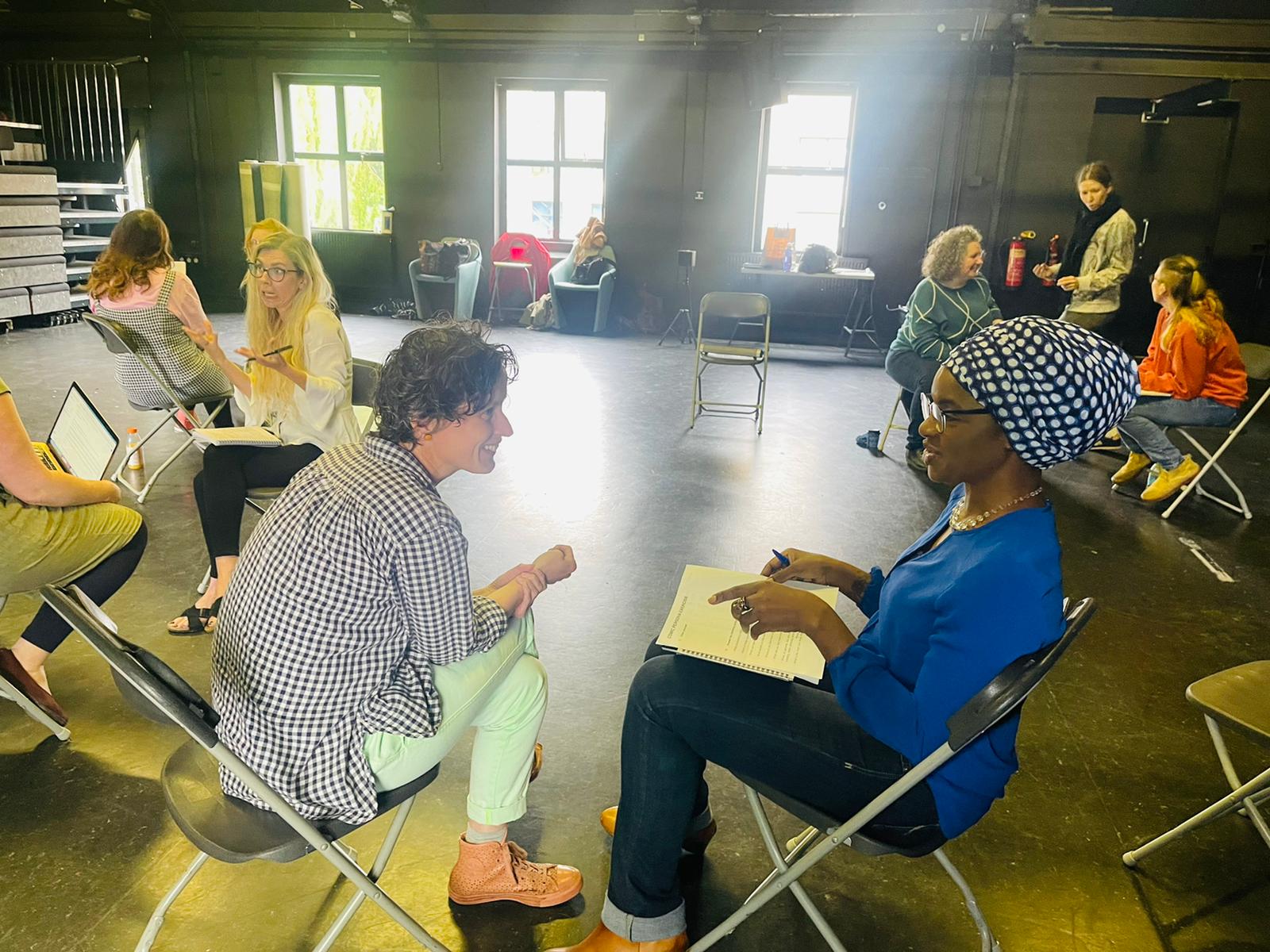 Dr Natalie Diddams is a lecturer, practitioner and lead facilitator of the Women’s Comedy Workshop, which specialises in the empowerment of women and non binary people through comedy. Over the past six years, Natalie has developed a new approach to writing and performing stand-up, which has creativity and collaboration at its heart. In that time, Theatre in the Mill has collaborated with Natalie on numerous projects; both virtual and live, in Bradford as well as internationally, with the ultimate aim being to provide a safe space where participants can experiment with stand-up, make new friends and (most importantly!) have fun.

Can you introduce yourself to our readers?

I am a theatre-maker and academic who is based in Manchester. I got my PhD at Manchester Metropolitan University – looking specifically at comedy and women’s empowerment. I now teach on the Acting BA at MMU and on the Theatre and Performance Studies BA at the University of Warwick. I lead the Women’s Comedy Workshop at Theatre in the Mill, and also work as a freelance director and dramaturg. I love balancing my artistic practice with lecturing and research – it’s an ecology that works symbiotically; most of the time, anyway!

What inspired you to go ahead with your PhD?,

I honestly never thought I would do a PhD. A couple of people had suggested it to me, but I could never think of a research question. It’s such a big piece of work, you’ve got to find something that you really care about. I think I found that a bit daunting. However, in 2015, I started working on an adaptation of an Ancient Greek comedy by Aristophanes. The play is called Thesmophoriazusae – which is very difficult to say! And I became fascinated by comedy. In particular, I became fascinated by the place of women within comedy. Thesmophoriazusae is 2500 years old, and – perhaps unsurprisingly – it’s very misogynistic. But many of its tropes and themes feel weirdly familiar. And it has this rebellious female chorus, who are using comedy to find new ways of fighting back against the patriarchy. So I started thinking – all this time has passed – but how have things moved on? What does comedy offer women today? These questions led me to the beginnings of my PhD.

What inspired the Women’s Comedy Workshop?

I organised some workshops for women as part of my early explorations of Thesmophoriazusae. I wanted to create a contemporary feminist response to the text, and it felt important to include the voices of ordinary women in that. I also felt like I needed a community of supportive women around me, because – if I’m honest – comedy absolutely terrified me! I was brought up in one of those ‘women aren’t funny’ families, and just had no idea what I was doing. I co-facilitated the workshops with Kate Fox (who is a brilliant comedian, poet and academic researcher), and brought together a diverse group of women from Bradford and the surrounding areas. We had so much fun. We played games, tried out comedy techniques and had incredibly interesting conversations. The workshops became a central part of my PhD research, and then a regular part of Theatre in the Mill’s programme. More than 150 people have now taken part in them and they have become an institution in their own right!

How has the program evolved since 2016?

We never used to do comedy nights – we’d just hang out and perform for each other in the sessions. But, over time (and with the help of the participants), a structure started to emerge. We developed our own exercises, and started to run a regular comedy night at Theatre in the Mill – called ‘Not An Open Mic Night’. The programme became extremely popular, so we had to create an application process – just to make sure that the group would stay fresh, with new people joining each time. Some of the most long-standing participants became facilitators, and I’m now writing a book about the methodology we have developed together. It’s all very exciting.

When did the project evolve to include international collaboration?

During COVID-19, we moved the workshops online. They worked surprisingly well in that context, and we started receiving applications from women living all over the world – in the US, Germany, Spain, Malaysia. It was bananas! And it made us realise that we could expand our horizons. So, we applied for some funding from the British Council, and started rolling out the workshops in different places. Rich Warburton (of Theatre in the Mill fame) had some contacts in Karachi, and I’ve now led two projects there; partnering with an amazing comedian called Natalia Gul Jilani, who runs a company called The Jungle. Together, we’ve led a large number of online comedy workshops and organised two live comedy events. Working with Natalia and the women in Karachi has been an honour – I’ve learnt so much from them and , in some ways, they got me through the pandemic. I’ve also worked (via Zoom) in Nepal, Amsterdam, Hong Kong and the US, and I’m hoping that I will be able to visit some of those places now that the pandemic is over.

Would you say COVID-19 was an advantage or disadvantage to WCW?

I think was a bit of both. On the one hand, people had a lot of free time, so we got more interest in our work. We were able to go global, as I’ve already mentioned, and we spent time developing a social media presence (I’m now on Instagram as @DrDidddamsComedy). However, I do think you lose something when you move comedy online. Stand-up is a social artform, which means that there is a two-way exchange of energy between the audience and the performer. In my PhD thesis, I describe comedians as ‘surfers’, who learn to work with the waves of energy that are created by the audience. It’s a highly embodied process. Even if you can hear laughter online (and you can’t always), it tends to be broken up – like lots of tiny ripples rather than one big wave. That changes the experience. So, while I think we’ve made the best of it, I’m really happy that we can do things in person again.

What has been the most challenging and rewarding moment so far?

Finishing my PhD was challenging! And moving everything online was scary – we had no idea how it was going to go. I remember, the first time we did it, pressing the button to let everyone in from the waiting room and just thinking “aaarrrggggghhhh”. But I’m really glad we did – it was great to connect with new people during the lockdowns and provide a space in which people could have a a laugh.

It’s much harder to think of the most rewarding moment, because it’s all been rewarding! I do remember the feeling after our first comedy night, though. After the audience had left, Rich played Beyonce through the theatre’s sound system and we danced on stage. We felt like celebrities! I also know that lots of people have really benefitted from taking part in the workshops. I sometimes get emails from people who have been struggling with their mental health, and who feel like the experience has been a breakthrough for them. That always feels nice.

For women interested in taking part, what do they need to know and when is the next opportunity to get involved?

We usually run the course at least once a year at Theatre in the Mill. But not always at the same time of year, so, if you want to get involved, you need to keep an eye on Theatre in the Mill’s website www.threatreinthemill.com or follow me on Instagram (@DrDiddamsComedy).

The Women’s Comedy Workshop is a really welcoming space. You just need to be over the age of 18 to apply, and to identify as a woman or as a non-binary person. You don’t need to have any comedy experience; just a willingness to throw yourself in and to have a go!

I’d recommend The Guilty Feminist podcast. In terms of books, I’d recommend Uproarious by Julie and Cynthia Willet, which discusses gender and comedy and power in a very accessible way. And I recently enjoyed Politics for Bitches by Luisa Omielan, which is on BBC iPlayer – very funny  and very important.

What is one thing that you would love people to know about you?

I’m not an expert! I’m just a gal that got out of her comfort zone. The Women’s Comedy Workshop invites you to do the same – it doesn’t teach a particular style of comedy. It just tries to hold your hand while you find out what works for you.

If you could travel 100 years into the past or the future, which would you choose and why?

I’m an extremely anxious person, so I think I’d go into the future. If things are ok, I could then come back and enjoy my life more. If they’re not, I guess it could have the same result.. I’d stop worrying about mortgages and make margaritas.

If you could give a piece of advice to your younger self what would it be and why?

I’d just tell her to relax and trust in the process! Young people often think that they have to conform to a specific template, especially when they’re trying to enter a competitive industry like the arts. But, as I say to my undergraduate students, the industry doesn’t want paper cut-out people that all look the same. Once you know who you are, you’ll find the place that fits.

Three words that inspire you?